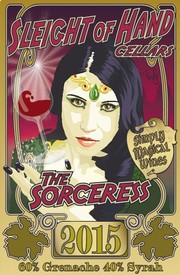 Sleight of Hand Cellars was founded in 2007 by Trey Busch and Jerry and Sandy Solomon. Our only goal from the outset has been to make world class wines while having the most fun that is legally possible. Our love of great wines from around the world, and our love of music, have inspired our vision and growth and have helped us reach a customer base that has the same passions as we do.

The winery has been open for less than ten years, but in that time Sleight of Hand Cellars has been named one of "The Next Generation" of up and coming wineries in Washington State, as well as one of "The Next Cult Wineries" by Seattle Magazine. In addition, we have been featured in Wine Spectator magazine and had numerous wines in various of the industry’s “Top 100” lists.

Most recently, the Wine Advocate had this to say about our wines: “While I've always loved the wines from these guys, they've hit a new level recently, and the wines are now up there with the crème’ de la crème’ of the state (and beyond).”

These and other accolades forced our hand, and in 2011 the winery moved from a storefront location to its current property in southern Walla Walla where we continue to focus on the goal of making wines that compete with the best in the world, from a combination of Estate vineyards and non-estate vineyards in some of the top vineyard sites in Washington State. Upon acquiring our current property, the winery built a tasting room and production facility, and in 2014 we broke ground on a second barrel room to handle not only our increasing production levels, but also to allow us more space for more "toys" in keeping with our philosophy that every year offers an opportunity to make even better wines. In 2015, we crushed 150 tons of fruit, and we expect to bottle close to 9,000 cases of wine—which maxes out our current facility. With the increase in production, and our love for sharing our wines, in mid-2016 we began work on a tasting room in the SODO area of Seattle, which opened in August 2016.

Established in 2005 by by Cynthia and Hugh Remash, Eagle Harbor Wine Company is a standout among Bainbridge Island’s celebrated wineries.

What began as a hands-on artisanal endeavor, primarily influenced by old world wine styles, Eagle Harbor Wine Co. has grown since in size (aiming for an ambitious 2,000 cases per year), complexity, and variety.

In 2009, Emily Parsons, who had a well-tended passion and curiosity for wine, began working alongside Remash after enjoying one of his wines. Participating in punch downs and crushes, immersing herself in the process and the winemaking business, Parsons continued her education studying wine and winemaking at UC Davis.

Then in 2012, inspired by the wine, an entrepreneurial spirit, and full support from fellow enthusiast and husband Steve Trimble, Parsons became an investor in the winery, purchasing seven tons of grapes.

Two years later in 2014, impressed by her passion and dedication, Remash saw fit to pass the torch – and his legacy – to his devoted protégé who runs all facets of the business today while Remash remains in the role of consulting winemaker. Parsons is wholly committed to the Bainbridge community, making superb quality, delicious wine, and honoring and furthering winemaking in Washington State.

Launched in 2007, Nine Hats was inspired by Long Shadows’ team of nine internationally renowned vintners. In the beginning, there was one Nine Hats wine, a red blend created from Long Shadows’ declassified barrels to support the winemakers’ ongoing, strict selection process for their signature wines. The overwhelming success of the Red Wine lead to the expansion of the brand and Nine Hats has come out of the “shadows” to assemble a portfolio of nine uniquely sophisticated wines.

Today, Long Shadows’ director of winemaking and viticulture, Gilles Nicault, and his winemaking team are dedicated to producing Nine Hats.  The wines are styled for quality and everyday enjoyment.